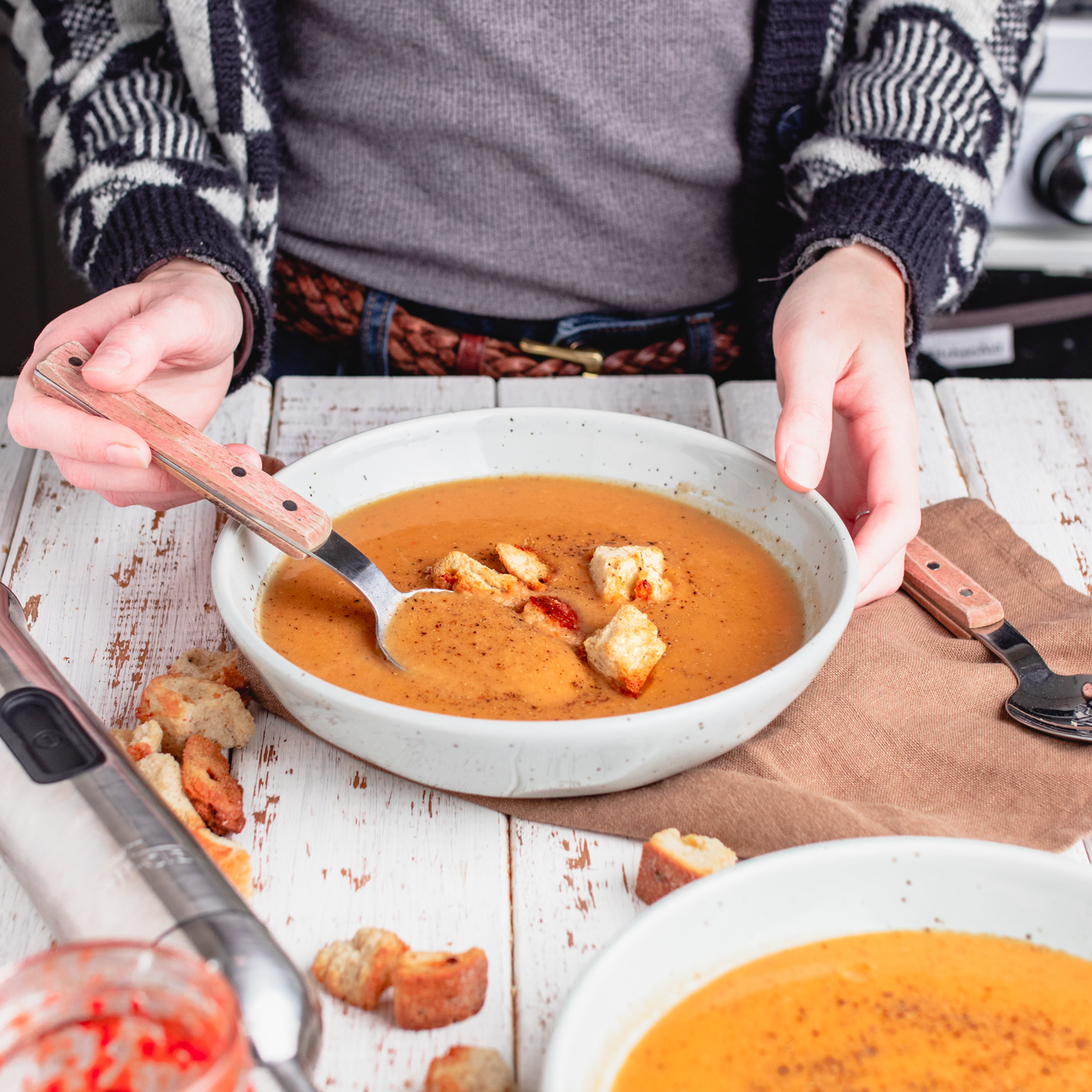 This recipe for Creamy Pureed Cabbage Soup is sponsored by All-Clad Canada.

If you asked Kat what her favourite food is she’d probably say pizza. But in all honesty it’s probably actually soup. It’s comforting, easy to make, keeps well in the fridge, tastes delicious and reminds her of home. Growing up she had A LOT of soup, in particular this Cabbage Soup. It’s something her dad used to make every Fall/Winter season it’s without a doubt one of her favourite recipes in the world. So when All-Clad Canada sent us their cordless immersion blender for this week’s recipe we knew it was the PERFECT recipe to veganize. 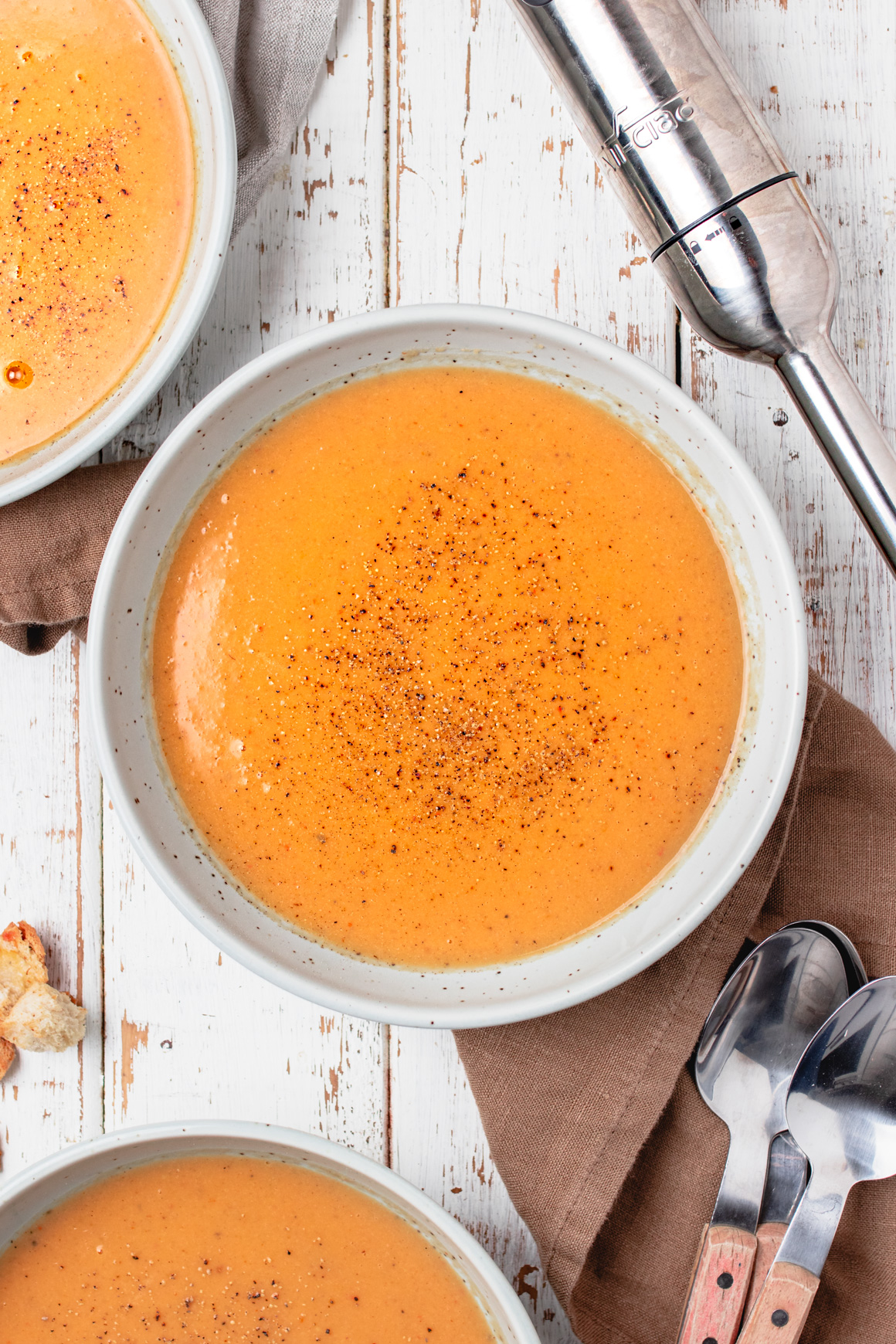 So let’s breakdown this soup. It’s creamy, has some heat, super savoury and packed with nutrition! The base of the soup is cabbage and white kidney beans, which means it’s loaded with protein, vitamin K and vitamin C. So what exactly did we need to veganize? For those that don’t know Kat is half Portuguese, which means that her Dad often includes Portuguese elements into his recipes. This soup gets it’s delicious heat from Portuguese sausage chouriço. In few words it’s essentially the Portuguese version of chroizo with different levels of spices and flavours. Not the easiest thing to veganize. Instead I looked to veganize the flavours. Chouriço is spicy, smoky and deep in flavour. With a couple key spices and condiments, the flavour is nearly identical to the one she grew up with. That’s not even coming from her, that’s also straight from her dad as well. 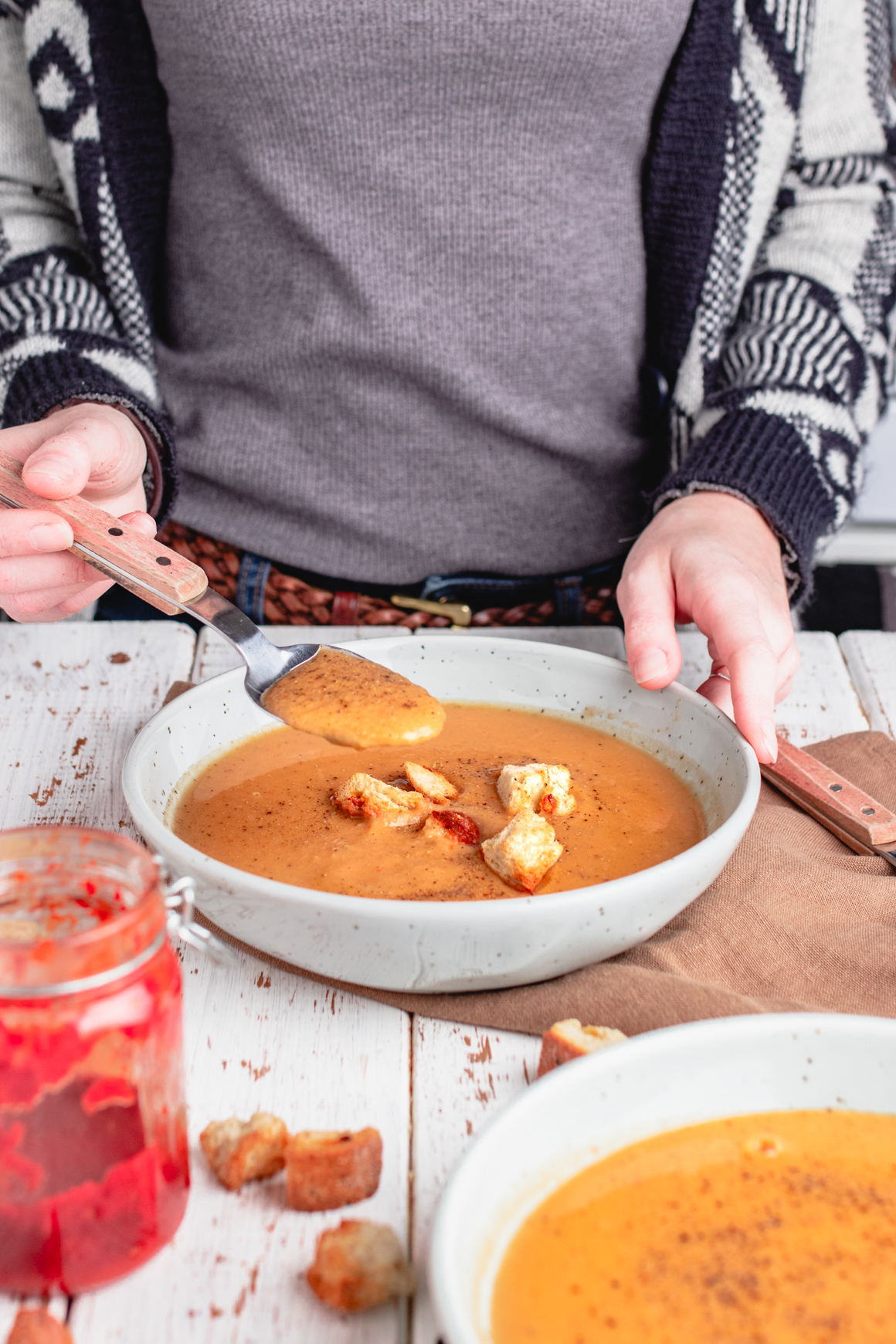 Why you should make Cabbage Soup: 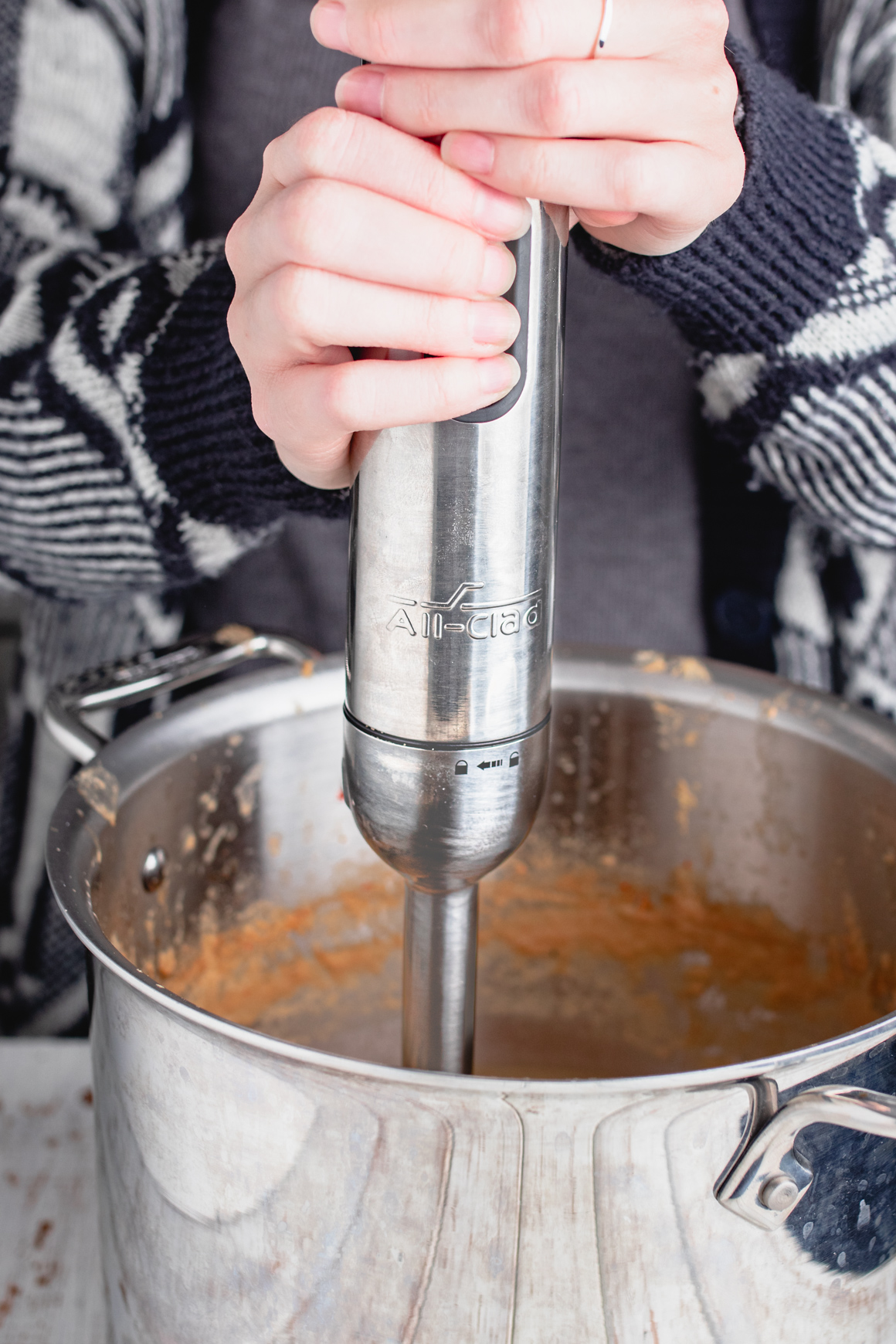 Now let’s talk All-Clad Canada. This blog post is our final recipe in a series of delicious plant-based recipes in partnership with All-Clad Canada. To end a delicious partnership they sent a Cordless Immersion Blender just in time for soup season! We’ve used blenders to puree soups in the passed, but WE LOVED using this immersion blender. There was no need to carefully pour hot liquid into narrow blender, then to carefully blend hot liquid. Instead we used the immersion blender right in our pot (yay less clean up!!!). The cordless feature means that you aren’t bound by a short cord, instead you can blender where your pot is instead of carrying it near a socket. Finally with multiple speeds, you can blend even the toughest of ingredients until smooth. We totally recommend an immersion blender if you’re a soup lover like Kat.

Don’t forget to check out the other delicious recipes in partnership with All-Clad Canada. 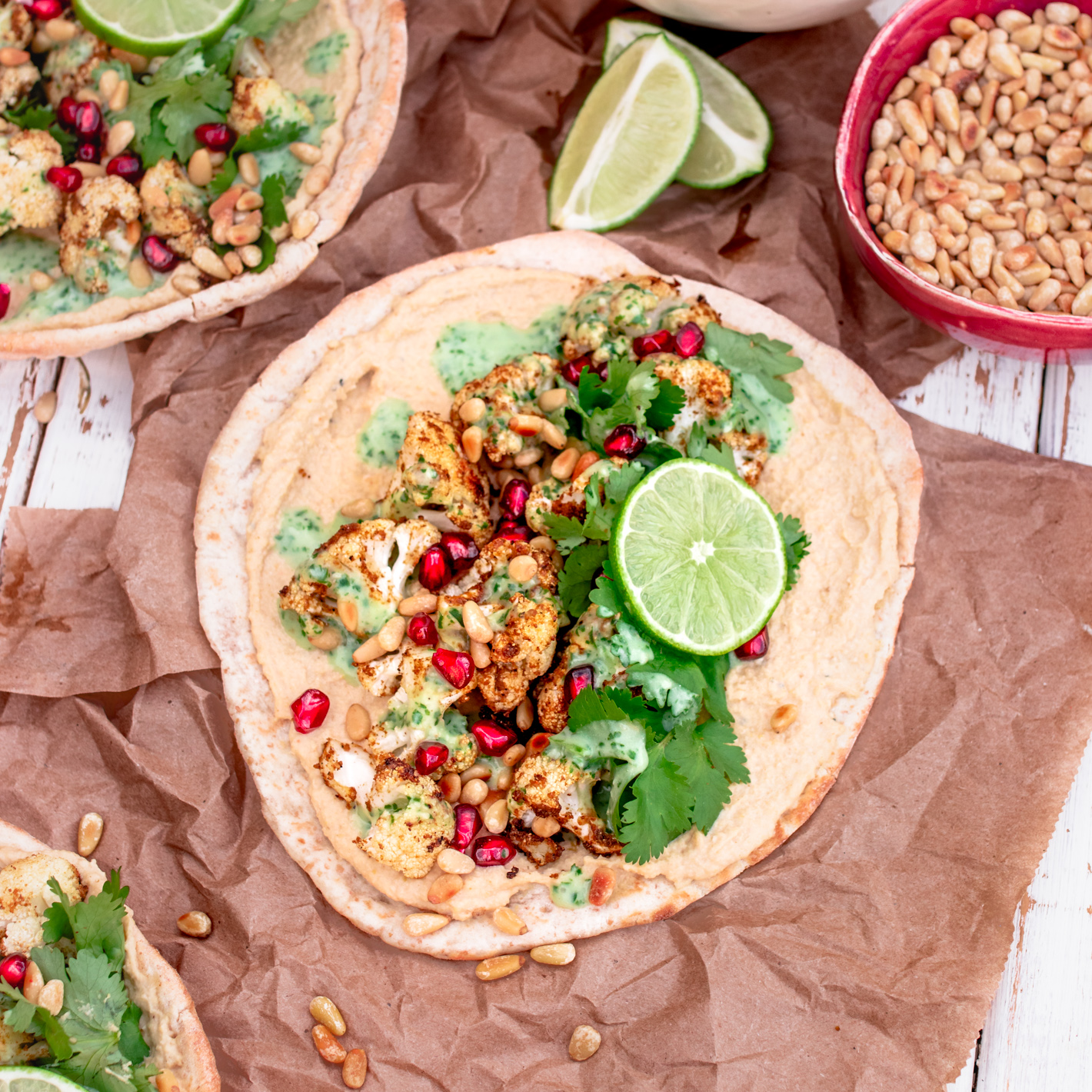 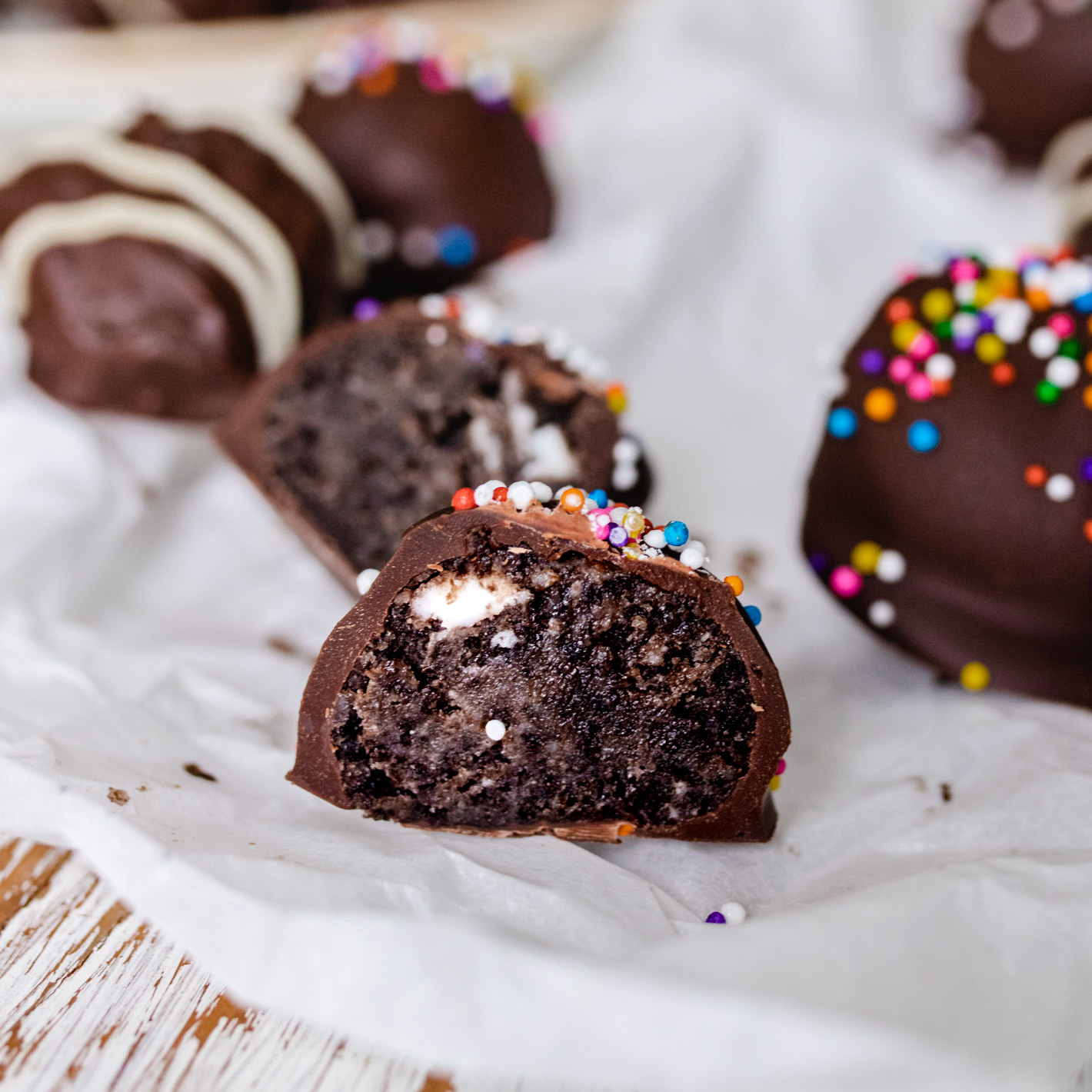