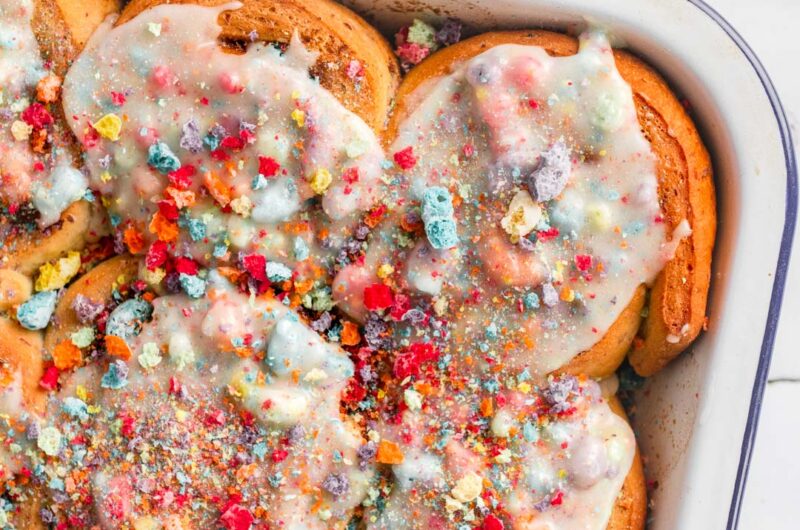 Breakfast and dessert become one in these sweet Vegan Cereal Milk Cinnamon Rolls. Packed with a cinnamon sugar and fruity cereal filling in between soft, pillow-y dough, and topped with a cereal milk glaze.

What happens when you combine cinnamon rolls and your favourite fruit cereal? Pure happiness. These Cereal Milk Cinnamon Rolls are the best of both. Sweet, pillow-y, and comforting – these Vegan Cereal Milk Cinnamon Rolls are our new favourite sweet treat. Made with sweet rolls, a cinnamon and fruity cereal filing, and a creamy cereal milk glaze. We promise you’ll be hooked after the first bite. Perfect for breakfast, brunch, or dessert – everybody will be asking for seconds.

Cereal milk flavoured desserts are growing in popularity every day thanks to the creative mind of Christina Tosi. To say we’re inspired by her is an understatement. We’ve both learned so much about dessert and baking from her. These Cereal Milk Cinnamon Rolls are inspired by her cereal milk creations.

This sweet treat is made 100% vegan, without the use of dairy, eggs, or any animal-based ingredients.

Can I make these the night before?

Yes! Once you get to the second proof – after you’ve rolled them – place them on your baking sheet, cover with plastic wrap and leave in your refrigerator to rise overnight. The next morning you want to remove them from the fridge at least 30 minutes before baking so they can come to room temperature and do their final rise.

What if I can’t find vegan butter?

That’s okay, while vegan butter is the preferred choice you can also use vegan shortening or coconut oil. Please do keep in mind though, that we haven’t tested this recipe with those modifications. The taste and texture could be different than the original recipe and not result in a success.

Can cinnamon rolls be made without a stand mixer?

You can opt to knead the dough entirely by hand, but remember this will take much longer and requires some muscle. Knead until the dough is smooth and when you press it with your finger it should bounce back. 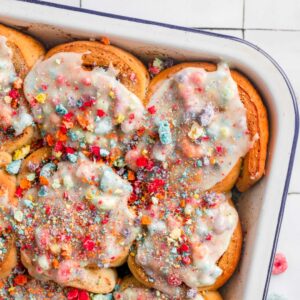 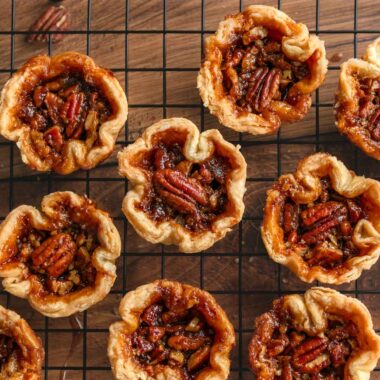 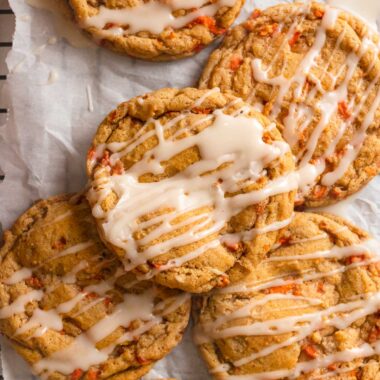